At 15.50 hrs. On May 6, 2020, Capt. Waiphaikrai Wapee, Deputy Minister arrived at Southern Curry Kitchen Restaurant located in Mueang Maha Sarakham District. Apparently there was a dispute over a debt owed on a motorbike.

Restaurant owner, Mr. Hua Khua was already Stressed about money before the suspect Mr. Udomsak Thepsararat, 31 years old came to collect. Everything quickly turned gruesome, they argued back and forth resulting in the suspect shooting his 9mm pistol 7 times. Mr. Hua Khua’s wife and stepson were killed inside the Restaurant. Ms. Pranit Khong-In, 43, has gunshots to the head and neck. Her son, Thanit Khong-In, 23, also had gunshots to the head and chest. Suspects nephew  was also shot in the back and rushed to the hospital. More than 100 officers sealed off the area to prevent the general public from approaching the scene. Meanwhile, the suspect’s brother was brought to the scene in an attempt to persuade Mr. Udomsak to surrender. Mr. Udomsak finally surrendered to the Police officers who then brought him to Muang Maha Sarakham Police Station. This incident is still under investigation.

Udon Thani – 2 Laos Women Busted for Smuggling Over B100,000 of Methamphetamine’s – Video Chiang Mai tourism authorities are concerned that many hotels and tour agencies remain closed as the province prepares for a surge of tourists from the government’s travel-stimulus scheme.

Punlop Sae-Jew, who chairs the local Tourism Council of Thailand branch, said Chiang Mai has shown little interest in opening to tourism because this time is traditionally regarded as the low season.

Responding to complaints from hotel operators that it was not worth reopening with occupancy rates below 12 per cent, Punlop pointed out that by opening hotels operators would at least gain some revenue.

Meanwhile of the approximately 1,000 tour agencies in the province, 80 per cent remained closed while 20 per cent were focusing on running their business via online channels, he added. A feud between two brothers in Udon Thani province ended in murder after the younger sibling became convinced the elder was having an affair with his wife. Somkid Phrachai was arrested on Wednesday (July 22) for fatally shooting Sathit Phrachai, 30, in the chest. The suspect said he lived in their father’s house with his wife and son.

Two weeks earlier, his older brother had come to live with them. Soon after he noticed footprints that were not his in front of the bedroom where he slept with his wife, said police

When he asked his wife to explain, she only gave a suspicious smirk, which heightened Somkid’s paranoia about a possible affair. His father then said he may have left the footprints after entering the room earlier to check on his grandson.

However, Somkid still had doubts, which led to an argument between the trio which resulted in him murdering his own brother.

The grief-stricken father attended the funeral rite on Thursday (July 23). Meanwhile, Somkid’s wife, Janrat Bua-khao, 23, insisted she had not had an affair with Sathit.

Source: Thai man shoots brother for allegedly having affair with his wife The tough stance is expected to follow if an amnesty for short-term visa holders is not extended beyond July 31st as indicated. The move coincides with a continued crackdown on foreigners working illegally in the kingdom and those engaged in criminal activity. This has intensified given current high levels of unemployment in the Thai economy due to the virus crisis.

A spokesman for Thailand’s Immigration Bureau has warned foreigners stranded in Thailand who cannot manage to leave the country before their visa expires on July 31st next, to urgently seek a letter from their embassies as the kingdom begins a ‘clear out’ which could make them the subject of overstay fines as well as arrest and detention by Thai authorities. With a strong indication that the visa amnesty for visa holders stranded in Thailand since the state of emergency was announced at the end of March, will not be extended, it is time for those foreigners with visas to either return home or regularize their affairs at the nearest  Immigration Bureau office.

The danger of not doing anything is a very real one. This week, a top Immigration Bureau official, Colonel Phakkhaphong Saiubon, said that those who cannot organize flights should get a letter from their embassies. The renewed urgency of the note struck coincides with renewed impetus in the crackdown on foreigners staying illegally in Thailand launched last October by Immigration Bureau chief, Lieutenant General Sompong Chingduang.

Thailand’s Immigration Bureau has signaled that it is highly likely that the current visa amnesty for travelers or tourists stranded in Thailand since before the state of emergency was announced at the end of March, will end when it expires on July 31st.

It comes as immigration authorities have reopened their ancillary office in Muang Thong Thani, on the outskirts of Bangkok, to cope with increased demand as foreigners prepare to flock to process their visa extensions. The offices were first opened just weeks before the current visa amnesty to allow for social distancing as visa holders are processed through the system. On Friday last, Colonel Phakkhaphong Saiubon, a spokesman for the bureau, spoke of a need to ‘clear out people’ in the system as Thailand fitfully moves towards normalizing travel in the future in and out of the country.

The immigration police officer was responding to questions on the status of the visa amnesty which has already been extended once and was first introduced on April 7th.

It effectively meant that any visa expiring after the state of emergency was announced on March 26th would be automatically extended.

The initial expiry date was April 30th but this was subsequently extended to July 31st.

Colonel Phakkhaphong was forthright in his assessment.

‘There most likely will not be an extension. It’s all quiet on that front. It’s been a long time and we need to clear out people,’ he said.

‘Thailand and the Thai government are already generous. No other country has this long of a visa amnesty.’ 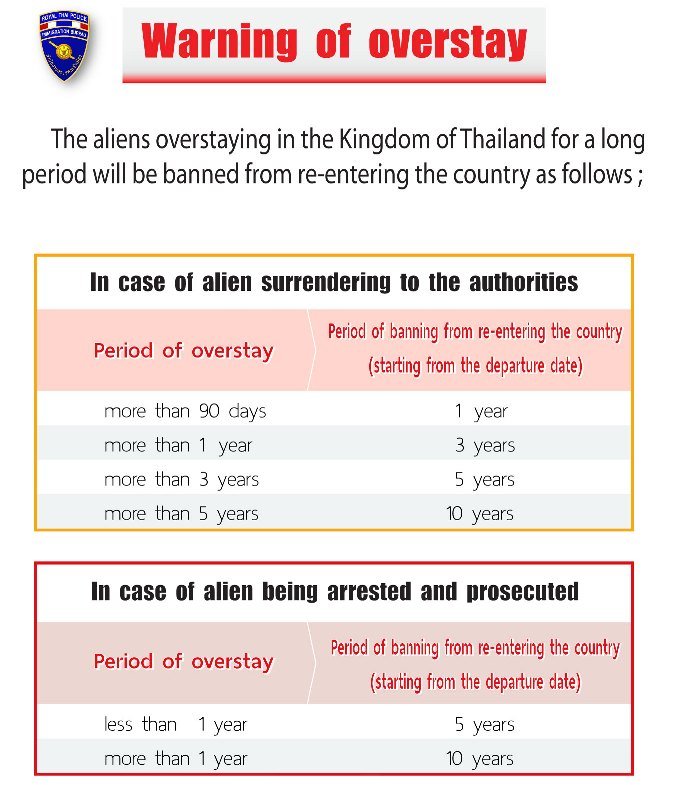 There are currently no figures available suggesting how many foreigners may still be left stranded within Thailand’s borders.

It is estimated that, at the outset of the emergency, as many as 500,000  foreigners were accommodated. This number has been steadily reduced as foreigners availed of scheduled flights which are still flying out of Suvarnabhumi Airport in Bangkok as well as repatriation flights organized by foreign governments.

The situation after July 31st will mean visa overstay fines will apply to those foreigners overstaying their visas from that date. They will also be required to comply with the 90 days reporting requirement.

This visa amnesty did not apply to foreigners who already had visas other than a tourist visa or who had entered Thailand before January of this year.

There is already evidence that immigration bureau officers and other police forces have already stepped up enforcement activities against foreigners living and working illegally in Thailand over the last few weeks.

This has been part of an ongoing security crackdown introduced by the junta government in 2015 and carried over with the aim of tightening Thailand’s borders and improving security.